Some have asked what sort of training we are required to do ahead of the race so I thought I’d provide a brief insight.

Clipper run a compulsory and intensive training programme over 4 progressive one-week sessions. For me this started in April ’14 soon after I signed up for the race. As mentioned, it is compulsory so even if you are an accomplished sailor you are required to complete. This is understandable really as it is important that everyone is familiar with the boat and operates in a similar manner approaching each task (or Evolution) in the same way every time. Sounds simple but that’s how you can be efficient and safe (perhaps better said the other way around!) every time.

Week one: this week is really about familiarisation and includes your RYA competent crew qualification. You quickly appreciate that sailing speak is a whole new language (a sheet is a rope and not bed related for example), a boat has many trip hazards (you become intimate with these pretty quickly) and using sails to climb into your bunk takes some getting used to (as does the scoring system for the dismount).

For me this was an eye opener. Sails are bloody heavy and the combination of fresh air and physical work is exhausting. I think it was soon after this week that I took up boxing to try to wake up my arms and shoulders. Until this point I had cycled and done a bit of running and having an upper body was a nuisance.

Incredibly friendships came out of level 1 which I will treasure for many years to come. You share the start of a long and enormous journey do I guess it’s only natural.

week 2: this was a bit of a shock. It started with sea survival training. Can you swim in a life jacket towing someone? Can you get in an out of a life raft (don’t underestimate just how hard this is)? And just how uncomfortable is it to get into the life raft with the crew, close the doors and wait for the sauna to heat up? Very.

After that we had our first taste of being offshore day and night without checking into dry land. No warm showers in the marina porter cabin, no solid toilet doors. A flavour of what was to come.

I did my ‘level 2’ back in February 2015. A longer gap than I had hoped after level 1 but that was care of a broken leg. Anyway, as is true to form we had 40 knot winds in the shelter of the marina and similar when we took to the Channel. In fact, we hoisted the main sail and two reefing lines instantaneously sheered. Back to the marina, playing bumper cars with the other boats, and into the chandler.

Eventually we got out and stayed out experiencing the ‘channel chop’. The English Channel is a confused mass of water which means there are no steady waves that your stomach can get used to. At one point I was called on deck in sleet and snow at midnight and wondered where everyone else was. There were meant to be 7 on my watch and 7 handing over from the last watch. There was me (my watch) and Dennis (the other watch). That’s it. I thought I may have poisened everyone as I was ‘mother’ the night before but it appears it was the Channel. At one point on the south side of the Isle of Wight with waves crashing over the bow there was a call from the very sleep deprived skipper to take down the Yankee (the forward most sail). The helm was being sick over her shoulder, I crawled to the snake pit (the home of all winches and lines) and the skipper and mate danced on the foredeck in between being fully submerged in the icy sea. Special.

Week 3: this started with some boring offshore safety classroom training (I won’t say that if I ever come to need it!). After that we took to the boats for the introduction of the spinnaker. The largest and most complex of the sails to set. In fact there are three of onboard and their use will depend on the wind strength. You will have read in this week’s skipper and crew duties that they are now aptly names after warrior legends.

I’m sorry to be graphic but this was also the week of my first proper use of the heads. It takes getting used to a flimsy piece of cloth separating you from the galley and the rest of the crew. Not only that but you’re propped up at an angle of 45 degrees. Trust me, it is a big moment as you cannot carry any inhibitions with you around the world.

I made some lovely friends on this trip, mostly now on other boats, and I can’t wait to catch up with them all in Rio and beyond.

Week 4: well this was the biggie. While all previous training is big and important, this is the culmination of all that hard work. All 12 boats were out with over 200 crew and the racing skippers sprinkled across them. This week was racing! We practiced race starts and sailed against each other to france, twice, and to the West Country.

Truth be told we were mid fleet most of the time and at one point we were becalmed in the middle of the channel. Once out of the shipping lanes we set about learning to whip and splice ropes (to stop fraying and to make useful loops/doughnuts) and service winches. Once we’d done our work our skipper allowed us to play. Pretty incredible swimming in such an expanse of water. Thankfully it was on one of our few summer’s days. 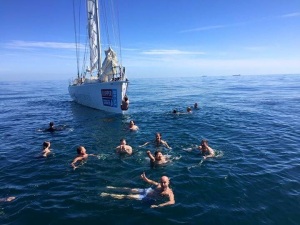 All that training is now behind us and have a single refresher day when we join the boat, in my case when I get to Rio.

As for training outside of the sailing, I have been working hard and have become a pet project of Crossfit Tooting. For those who aren’t familiar it, Crossfit was set up by some ex US marines (I think) to strengthen and condition the full body. It’s hard core. Thanks to Dani, Steve and the team I’m now the proud owner of some muscles (not desperately lady-like) and some callused hands…

To give you a flavour this morning we had a workout in pairs which included a 2,500m row where every 500m you had to do 25 burpees. After that you had to transfer 800kg across the gym (40 m) by hand.

Still, I’m loving it and will do all it takes to get into my bunk to sleep (hence the need for pull ups) and be on the pointy end of the boat when the going gets tough.

Have a good day!