Apologies for being quiet in recent days. It’s called battling my way through a to-do list.

Many close friends will testify that whilst I’m sure I was born lazy I have an amazing knack of biting off far more than I should be able to chew. This week and the next few months are a great example of that. Not only am I sailing (I won’t let you forget that) I’ve decided to take on a rather large renovation project.

I had a lightbulb moment at the end of March. If I’m away for 4.5 months it’s the perfect time to do work on my house.

Apart from the fact that I didn’t own a house.

With a bit of crude maths I worked out that if I could find somewhere to buy at the right price in less than a month and IF I could complete (12 wks), move house and get planning (8 wks) before leaving for Rio I’d be set. Not to mention a project manager, builders…you guessed it.

Turns out that was a little simplistic but in essence that’s exactly what I’ve done. Quite frankly it’s utter madness. Did I mention I got a new job around that time too?

Anyone that has ever had experience of organising ANYTHING will know that as you draw closer to the date there are some fairly critical questions or decisions. Well, I’ll be on a boat and uncontactable for all of those.

Choosing grout colour, door handles, placing of electrical sockets, loo seats, flooring, you name it, I have to do it in the next 7 days. I also have to try to pacify myneighbour who is determined to let her frog live undisturbed in her inner city retreat surrounded by 25 dustbins.

That may explain why sailing is further down the to-do list.

There have been a couple of curved balls in the last few days. I’m not talking rugby, I’m talking about things that are even more exciting.

My little neice Emily was born. I’m an auntie! Emily was due to be born in Cape Town the week before I’m due to arrive by sail boat. My bother and Georgie’s timing was immaculate. Better still I get to see pictures of the little munchkin before I go. I’m totally biased but she’s a cutie. 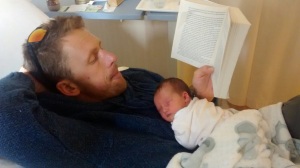 The second curve ball was the package I had to collect from the post office this morning after receiving one of those little red cards. It needed my signature, how very puzzling. You can imagine my surprise when I opened the package to find two pairs of pants. It’s been a while since I’ve stumbled across boxers with no obvious owner! I messaged to my brother to be greeted with a chuckle and a negative response. Hmmm.

Then the penny dropped. Word has got out on the boat that Al Italia have given me a generous luggage allowance to Rio (probably because they don’t expect it to travel with the owner). Four requests from the Atlantic so far:

Anyway, that’s enough waffle for the day. I’ll get back to sailing chat soon. For my own sanity I need to!

The pants of power