Today was boat prep day. At 9am we were presented with a to-do list that we had to eliminate under the watchful eye of Mike Morgan.

It becomes a little tactical. No one wants to get stuck down-below so the art is to quickly make yourself useful in a role that is on deck or away from the boat. I started heaving all the sails out of the locker before taking them up to the race village (a tent).

We unfurled all three spinnakers (kites) and checked them meticulously. I’m talking pin prick sized holes through to the quality of stitching of  down the length of the sail from weathered repairs. Out came the tape, thread and sewing machine. Yes, I’ve been trained of another skill I will doubtful use in the real world.

I then applied the Warriors’ secret weapon. In the dead of night with no moon or light pollution, it is impossible to trim the sail to perfection without ruining night vision. We have discretely imported from Australia glow in the dark spinnaker tape. A force to be reckoned with in the South Atlantic.

It is anticipated that we’ll be beating into wind for two days (think sea sickness) before running downwind all the way to Cape Town. As mentioned earlier the weather conditions are getting a little spicy so we’ll be holding on tight.

Bunk allocation has been and gone. Vin and I are sharing the bottom forward most bunk on the starboard side. No dismount points available to us on this leg. We’re also less likely to get injured.

While on the subject there’s been only one serious warrior injury todate. After sailing over 6 thousand miles to Rio, Barry fell down the lazarette hatch doing the deep clean in the marina. Ouch. 2 broken ribs and a very sick knee. The skipper on team GB (pete’s in the blue gloves) found himself multi tasking en route. Perhaps putting his sail making skills to use? 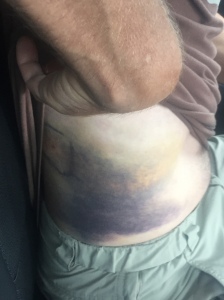 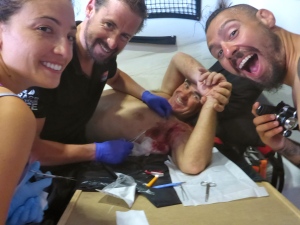 Two nights in a comfortable bed and a day full of briefings (clipper, crew, watch, safety) remain between me and the atlantic. Tomorrow I’ll also find out my role on the boat. Fingers crossed for the bow team. Hard, wet and wild….!!!

Alexander McQueen eat your heart out

One thought on “Alexander McQueen eat your heart out”