…and neither were me!

After my first full night’s sleep I’ve had a chance to sit back (read: mend sails), relax and reflect on the past couple of weeks.

Well, it was wild.

From the minute we left Rio (in first place!) we battled through winds and waves of a magnitude that I had not witnessed before. It’s funny though how quickly it all becomes normal. Life in a caravan at somewhere between 30 and 45 degrees (see iPhone charger plumb line) is suddenly home and your cold (or sweaty), rather damp, cramped, shared bunk is a little haven. 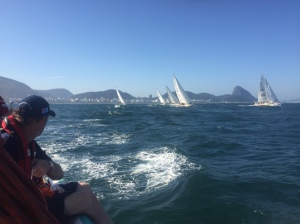 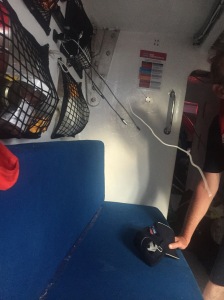 It’s hard to put it all succinctly into words so I’ll pick out some of the key memories/learnings for me.

– I cracked and was sick. As I was preparing dinner on the first night in the roughest conditions I can remember I took two moments out. You know that no one else is going to do the job so you just have to dig deep and get on with it. Vin, my mother buddy (and bunk buddy) was amazing and reaffirmed her ‘rock’ status. Both took ‘having a moment’ in turns. 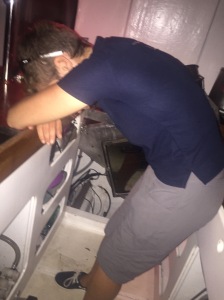 – I now know what tiredness, or perhaps exhaustion, is. Admittedly I went into the trip with low batteries after finishing up at work and prepping for my house refurbishment but oh my god was the lack of sleep hard. As a recap we would split the day into two 6 hour watches and the night into three 4 hour watches. It was unforgiving. Don’t be fooled into thinking that you get four hours of downtime. You don’t. It takes you 30 mins to get undressed and a further 30 mins to re-dress to get deck ready. If you want to brush your teeth or do anything fancy with your kit like try to dry your gloves you’re quickly down to less than 3 hours. Fit blog writing or winding down from the buzz of the ocean and then you are into 2.5 hour chunks. Did I mention the white noise?

These photos aren’t meant to be flattering, they are there to tell the truth! The bags under my eyes speak volumes. 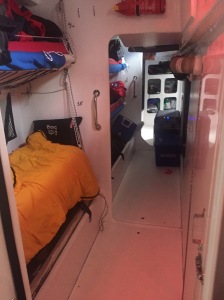 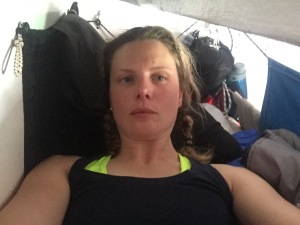 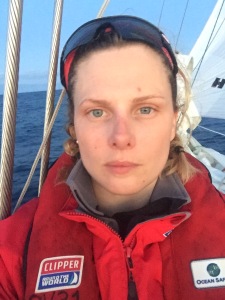 – It is NEVER quiet. At all times there your background playlist is shouting, the grinding of winches, the sound of water rushing over the deck, the reverberations from smashing through waves…it really is noisy and there’s no mute button. Again, it’s so surprising how quickly you block it out or at least incorporate it into your dreams. I thinks that’s probably why I used to wake up surprised to see us afloat.
– Physically this leg was no where near as tough as I had mentally prepared for. That is until the shit hits the fan. At that point you’re wishing you’d eaten spinach rather than rehydrated beef. That said, it’s true that your body is always active on a boat and fitness probably helps with keeping physical fatigue at bay. The power of Mother Nature can and will always make you feel pathetic and particularly delicate.
– Albatrosses are not all that they’re made out to be. I, along with 21 fellow crew members, had failed to google a picture of them before we’d left and so bird spotting was driven by imagination. I was expecting a small hang glider. Given we didn’t see one of those and instead the boat was pestered by large seagulls it was a little disappointing. Turns out they were albatrosses or albagulls they shall now be known. Ten-a-penny.
– The South Atlantic has little obvious wildlife but what it did put on show was spectacular. Humpbacks breaching right next to the boat, phosphorescent torpedoes or dolphins dancing around the boat at night, albagulls catching thermals off the sails.
– Sailing is simply using bedsheets held in place with bits of string to propel you forward. Simple. No. It’s really rather complicated. Throw in a bit of wind, the inability to hear and working with a bunch of effective strangers and all of a sudden it’s witchcraft. I have learnt loads but am by no means an accomplished sailor. 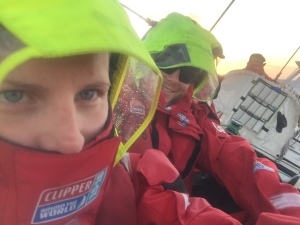 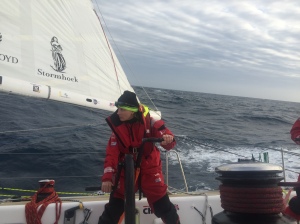 – It takes very little for the shit to hit the proverbial fan and when it does it’s usually spectacular. I remember when racing in the Solent that a ‘spinnaker wrap’ was a swear word. If that’s the case Mission Performance has developed Tourette’s. Wraps and tears became normal watch affair. Too normal. That’s not to say they didn’t bring a certain adrenaline rush or aprehension.  Our first casualty was not the tethered man overboard or the resulting gash, nor the near dislocated shoulder or broken leg, I’m talking about Boadicea our mighty code 1 spinnaker. Currently in tatters in a warehouse out of town. She will be victorious and fly again just after a large number of man hours. Huge thanks to my big bro who set about organising said warehouse when we were somewhere in the Atlantic. Dad, aeroplane hangers in Albany also suffice!! 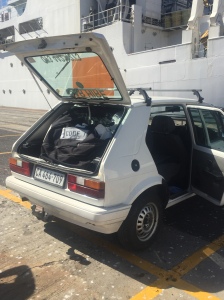 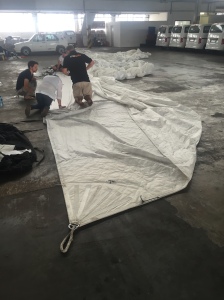 – Both my single change of knickers and salt hair wash half-naked at the back of the boat while one crew member was down below dealing with hypothermia, were deemed moments of absolute luxury. Yes, I had to wear ridiculous plaits and head scarf to keep the mop under control. I would go so far as to say that the salt hair wash made things so much worse. ITCHY!!! This is where the second casualty fell. My hair will be lucky to survive the 5,500 miles to Australia and on from there. I cut a dred out this morning and it’s only been 15 days. 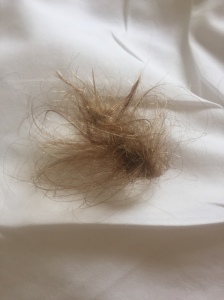 – I have huge respect for my skipper not only as an individual but as the skipper of our boat. Calm, confident, strong, and an excellent communicator. Further, there’s something incredibly comforting knowing that he is SAS trained and has sailed the southern ocean before (and sewn 24 stitches into someone’s knee en route).
– You never know how the crew are going to fair given they’re a bunch of complete strangers doing something out of the ordinary. It is remarkable how we all got on (some at a deeper level than others) and functioned as a well-oiled team. Yes, there are going to be niggles but they were aired in ‘happy hour’ on a daily basis. I have some friends for life. 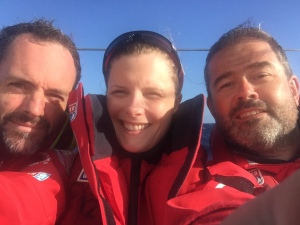 To conclude leg 2 was wild but it’s not all grim at sea!!

Time to rest and regroup for the mighty Southern Ocean.

Thank you for all of your support and kind messages. It’s really special to think of you all following us when we’re out at sea.

One thought on “Only two casualties”